I think “take photos of blue coco” has been on my to do list every weekend since November and I finally got round to it. Ta dah!

I cut this out so long ago I can barely remember anything about it so this probably won’t be a very useful blog post I’m sorry. I fiddled with the pattern straight after making my first Coco dress. Eventually cut out the fabric in May and then didn’t get round to sewing it up until October. Nearly a year after the first one. So blinkin’ slow!

But it’s done now and it has been in heavy rotation ever since. I’ve gained quite a bit of weight recently so it’s a bit too snug now. But I’ve started eating mainly sadness foods and not stuffing my face with office treats so hopefully it’ll fit better again soon.

I shamelessly copied the lace yoke idea from Katie of What Katie Sews but I can’t find her blog post with her lace yoke Cocos anymore to link to. I’m really pleased with how it worked out. I just traced off the yoke part of the pattern, cut it out in lace and sewed it to the front piece around all the edges using a zigzag stitch. Actually I used the three step zigzag stitch because if fancied trying it.

I made a swayback adjustment but I’ve got hell of a lot of bunching in the lower back area that I don’t think was as bad when I first made it so I think it’s the extra hip girth causing most of it. I’m not sure I can be bothered to make a bigger swayback adjustment anyway. I can’t see my back and I just don’t think I care. As long as I don’t look at these photos ever again and forget how bad the back looks.

I’ve started giving some quite serious thought to having a go at bra making as I have quite a fat back/large band size in bras but small boobs so I really struggle to find bras to fit. In this photo I’m wearing a 36AA and my fat is bulging over the band so I think I need a 38AAA, which doesn’t exist. Anyway, that’s not really relevant to this dress but these back and side view photos make me keener on the idea so I thought I’d share.

I bought a couple of knicker sewing patterns and a beautiful kit from Evie la luve so I’m going to have a go at making knickers to practice the whole elastic thang as I haven’t even really done much sewing directly onto elastic. 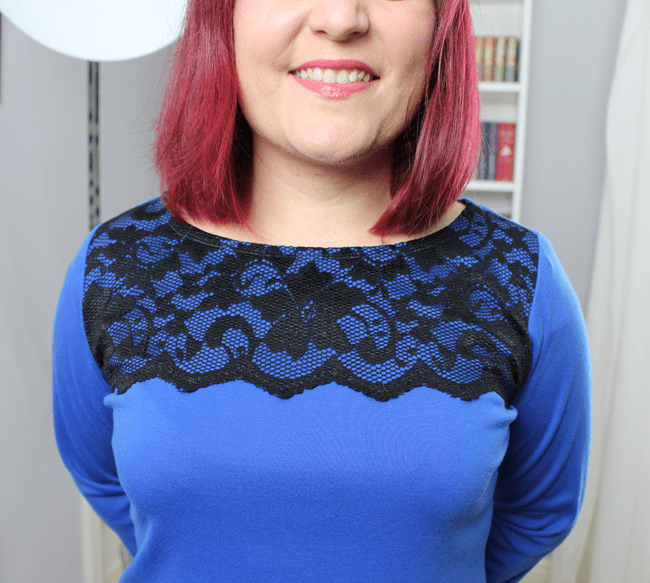 The lace overlay worked really well to elevate what could have been quite a boring dress and I’m really happy with it. I love the colour of the dress with my new hair colour too. I’ve got loads of this lace left if you have any suggestions of what to do with it. Lace yokes on everything!

Fabric used: Blue ponte roma from Plush Addict. I can’t remember exactly how much sorry, more than a metre but less than 2. I cut out on a single layer.

Any changes next time?

I think I need a little more length above the armpit. That seam digs in a tiny bit and I don’t think that’s just because of the enplumpening.

Unrelated to Coco but have you been taking part in #MIYMarch17 on Instagram? I’ve actually managed to keep up with it for the first time and I’m going to miss the prompts so if you know of any daily photo challenges for April I could get involved with I’d love to hear them.

Have a lovely day everyone.